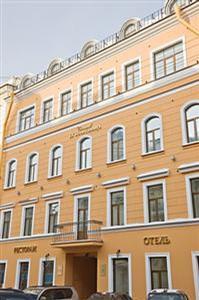 The hotel is located in a new building which has retained its historic facade on Stremyannaya street, so named by Tsarina Anne Ioannovna in the 18th century, and known as a street on which royal court servants lived. A photographic exhibition in the hotel museum displays old photos and artifacts relating to those famous Russians who lived and worked here, as well as how the building looked in days gone by. The hotel is a combination of old city traditions and European modernity. Rooms and public areas are decorated in a classical style which hails back to historical Saint Petersburg. There are 49 business-class rooms, a restaurant, and conference hall. Room price includes buffet breakfast and tea with home-made cakes at 5. The hotel is considered an Eco-hotel, and has been awarded a Green Key certificate.