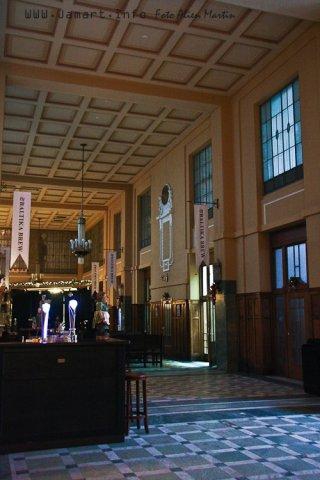 Located in a former bank building later converted by the Soviets into a meeting centre, Baltika-Brew is a large brew restaurant which offers a wide range of beers brewed by Russia's largest domestic beer company, Baltika, as well as a wide range of typical dishes from the European, Russian and Indian traditions. The atmosphere is a cross between English-style pub and traditional Russian inn, with wooden furniture, bar stools, a small stage for live music, and a selection of beer-themed writings decorating the walls. The restaurant also serves as an art space for live music, gallery displays, and video installations. The extensive beer menu has been selected by the head of R&D at Baltika, including lagers, dark beers, ales, and wheat beers with names like Monastery, Dark Velvet, Palace Ale and Soul Cherry. A must for beer lovers!