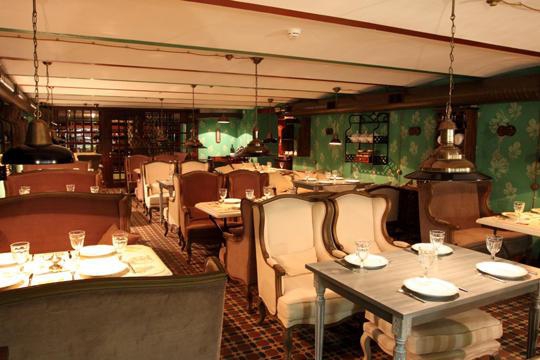 The building on the corner of Malaya Sadovaya and Nevsky prospekt was built at the beginning of the 20th century as a showcase for the Yeliseev brothers' merchandising. With its high steel-framed windows, the four facade statues representing Industry, Trade, Art and Science, and its stained glass, mirrored and dark wood interiors, it remains a high point of style moderne architecture. Nationalized after the October revolution, it retained its elitist associations for the Communist party hierarchy who were allowed to shop here to purchase such delicacies as mandarins, bananas, pineapple, and caviare, delicacies unavailable to ordinary citizens. After a checkered start during the post-Soviet days, in 2010 the city government let the store for a period of 10 years to local businessman and restaurateur Evgeny Pirgozhin, on the condition that it be restored to its former glories. When the shop reopened in spring 2012, it was an immediate hit with locals and visitors alike. The interiors have now been fully restored (with the addition of the central palm tree), fine food merchandisers and staff were imported from France, and no less than three restaurants were opened on the site - a coffee shop on the ground floor, the Mezzanine restaurant featuring a menu from Michelin-starred chef Julien Lachenaud, and the basement Sklad (Warehouse) Number 5 featuring the Yeliseev brothers' own recipes. There are counters for meat, cheese, and wine, patisserie, oysters, caviare, and look out for the chocolate fondues. The only bum note for us are the waxworks figures of the two brothers waving from the mezzanine. Otherwise a fantastic addition to the city's heritage and contemporary gourmet scene.