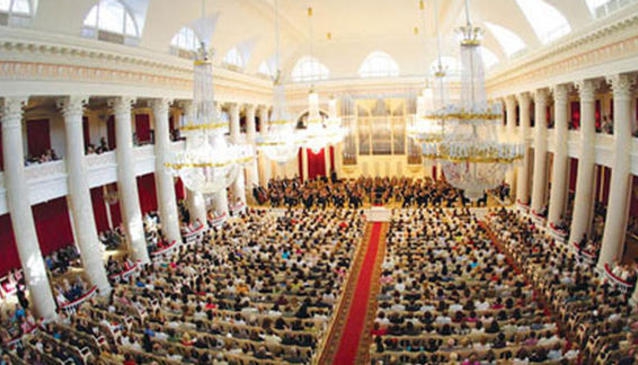 A Rossi facade along the south side of Arts Square, the building that today houses the Philarmonia was formerly the Gentry Club, later the Russian Music Society and then the Conservatoire. It became the Academic Philarmonia in 1922, and in 1975 was named in honor of the city's most famous musical son upon Shostakovitch's death that year. The Philarmonia has witnessed performances by many of the greats of the western classical music tradition, including Franz Lizst, Hector Berlioz, Robert Wagner, Gustav Mahler, Artur Rubinstein, Karl Schumann, and among the Russian greats Borodin, Mussorgsky, Tchaikovsky, Rimsky-Korsakov, Glazunov. Among the premiers that the Philarmonia has been privileged to host are Beethoven's Missa Solemnis in 1824, Tchaikovsky's six and final symphony, the Pathetique, in 1893, and most famously, Shostakovitch's Seventh Symphony, the Leningrad, which was performed here during the Blockade and broadcast throughout the Soviet Union as a symbol of defiance.

Fantastic acoustics, a packed annual line-up of subscription and festival concerts featuring the world's greatest classical music performers in the Main Hall and the Small Hall, and tickets available at reasonable prices mean the Philarmonia remains at the heart of the city's musical tradition.