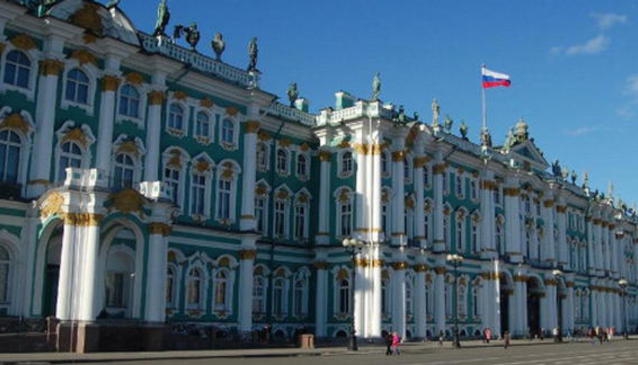 Directions to The State Hermitage Museum

If visitors ever arrive from another planet looking for a crash course in the history of human civilization, they could do worse than base themselves at the Hermitage, which proudly claims to have captured the essence of global culture in a single institution with its collection of over three million pieces. No matter how much time you allocate to visit the Hermitage, it will not be enough to see even a fraction of the collection, so be prepared to do your homework in advance and focus on those rooms and collections of interest. The collection was started in 1764 when Empress Catherine the Great purchased a large number of western European paintings for her personal collection, and has been added to on a regular basis since then. The building was stormed during the Revolution, and the whole collection evacuated to the Ural mountains during the dark days of the Nazi blockade of the city. But time and again the Hermitage has faced hardship and come back stronger than before.

Today there are collections of pre-historic art, classical, antiquity, western European (including one of the world's greatest collections of French Impressionism), Oriental, numismatic, and Russian art. There are a number of buildings which make up the Hermitage Museum, and these include the interconnecting buildings of the Winter Palace on Palace Square, the Small and Large Hermitage buildings which stretch east along the embankment, the New Hermitage on Millionnarya Street, and the Hermitage Theater, a chamber theater which regularly performs ballet and opera performances. In addition, one side of the General Staff Headquarters on the opposite side of the Hermitage is being restored and will reopen as a Hermitage gallery in 2014; the Menshikov Palace, home to Peter the Great's great friend on the northern side of the Neva also operates as part of the Hermitage institution, as does the Imperial Porcelain Factory collection. And further afield still, out at Staraya Derevnaya you can visit the Restoration and Storage Center which takes care of some of the hundreds of thousands of pieces not on permanent display.